After years of careful consideration, Whidbey Island Race owner, Schelleen Rathkopf, has made a decision about the future of Race Week. At this very moment, she is in the new home of Race Week – Point Roberts, WA – beginning the plans for the 2020 event in this location. This is an exciting development and, though not perfect, I believe it will be a smashing success and a net gain for sailboat racing in the PNW.

It’s no secret that I love Whidbey Island Race Week. It is one the most important events of the year for its fun factor, the quality of racing, and for the ways that it strengthens the sailing community. I have served on the WIRW Advisory Board for several years; and in spite of my affinity for WIRW, I have been a pretty enthusiastic supporter of the “Leave Oak Harbor” side of the Whexit debate. I’m excited to see what this new venue can do to redefine the defining PNW racing event.

Point Roberts is a beautiful location that provides the draw and the intrigue of being an entirely new race course for most attendees. More often than not, the first beat in Penn Cove was a matter of execution, not interpretation. This will not be the case for at least the first few years in Point Roberts. In fact, I don’t know anybody that has raced out of Point Roberts before, and I think that’s fun!

Given the location on the northwest side of Boundary Bay, it is fair to expect more boats from Canada will join the Race Week fleet. Delivery distances are in the 30-46 nautical mile range for boats based in Vancouver, Sidney, Nanaimo, and Victoria. Not only would it be great to see the fleet grow in numbers, but I love the idea that its going to take on more of an international feel. I’ve always enjoyed my interactions with Canadian sailors over the years, and I love the idea that this event can make us all feel like a more cohesive regional sailing community.

Point Roberts will be a vastly better venue for boats that are bigger and smaller than the current Race Week fleet. Exciting to me personally, considering how much time I’ve spent racing in the fleet, Point Roberts is a deep enough marina that it could accommodate the ORC fleet. Their estimated depth at a -3 tide is 11 feet. There are now five TP52s in the area (four in Seattle and one in Vancouver) plus a number of other big, fast boats with drafts too deep for Oak Harbor. It puts my stoke meter in the red to imagine a week of terrific summertime racing within that fleet.

More important to the event’s success, and more likely to promote the growth and accessibility of sailing in a broader sense, Race Week can now bring dinghies back into the fold. Despite efforts from all sides, the realities of getting dinghies from Oak Harbor out to Penn Cove were untenable. Launching in Point Roberts should be easy using the boat ramp that will be installed in the marina facility before the event in 2020. There will be essentially no delivery to the race course, a key for the small boat fleet. As you will read in the Race Week press release, there are already plans in the works to tie in a youth sailing event.

The local intel about the venue indicates that, similar to Penn Cove, the breeze tends to fill in the early afternoon. Any mid-summer regatta on the Salish Sea will have the risk of no-wind days, but because of its proximity to the racing area, Point Roberts should be able to facilitate shore postponements if the conditions require it. I have some fond memories of bobbing around in Penn Cove waiting for breeze, but if that becomes less of a feature of Race Week, yahtzee!

As someone who has (cough) never been one of those heads-in-beds that supports the local tourism economy, the camping scene has always mattered deeply to me and my sailing buddies. Point Roberts will offer on-site camping, and there’s a full service campground nearby with electricity for RVs.

The biggest compromises with Race Week in Point Roberts have to do getting there. For Seattle-based Race Week regulars, the delivery distance is roughly twice as far. It will be a haul to get up there, and I expect that the fleet will lose a few boats that are unwilling to make the trip. The gears are already turning on the idea to give the delivery crews a planned half-way stopover, which could ease the burden a bit. This distance, of course, is balanced by the closer proximity from many of the Canadian sailing hot spots.

With the infrastructure to support it in the form of a 35-ton travel lift, a 3,000-pound hoist, and the boat ramp – I think growth in the dinghy and trailerable sportboat fleets is likely. Boats coming from Seattle on trailers only increase their drive time by about 45 minutes compared to Oak Harbor, but any boat coming from Washington state must now go through two border crossings to get to the venue.

Over the next few years, I’ll be curious to better understand what kind of support the local Point Roberts boats and community can offer the event and attendees. The friendly volunteers and leadership at Oak Harbor Yacht Club have always gone above and beyond at Race Week, serving on the Advisory Board and helping with Race Committee, merchandise sales, food service, and support of the Kids Camp. The folks in Point Roberts have already shown gusto in partnering with Race Week, and I’m sure they will continue to be awesome, but they’ve got big shoes to fill! 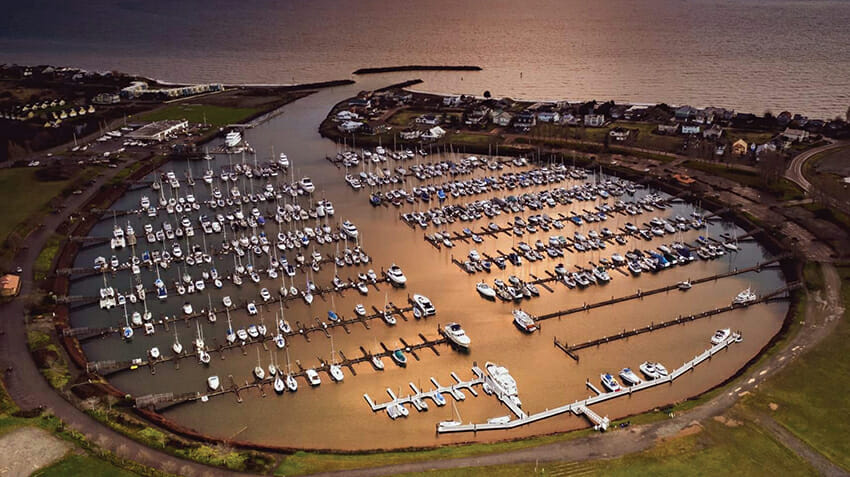 All in all, Good!

I’m in support of this move. While it is genuinely bittersweet considering how many fabulous memories many of us have from Whidbey Island Race Week, Oak Harbor’s challenges of depth, camping, and a broken hoist (with no plan for repair) are well known. The move to Point Roberts gives Race Week a whole lotta new: new location, new fleet make-up, new race course, and new appeal. I sincerely hope that the Race Week stalwarts won’t shy away from the longer delivery, because I think big participation and big fun is in our future.

In the more immediate future, the announcement makes this summer’s trip to Oak Harbor to bang the beach in Penn Cove and raise a rum punch to Oak Harbor exponentially more special.

Joe Cline is the Managing Editor of 48° North