For decades, the sleepy U.S. backwater of Point Roberts, Wash., has been overrun by foreigners — Canadians.

They’ve come to buy recreational property, buy cheap gas and dairy products, and drink way too much beer at The Breakers and Kiniski’s Reef Tavern on the Strait of Georgia waterfront. 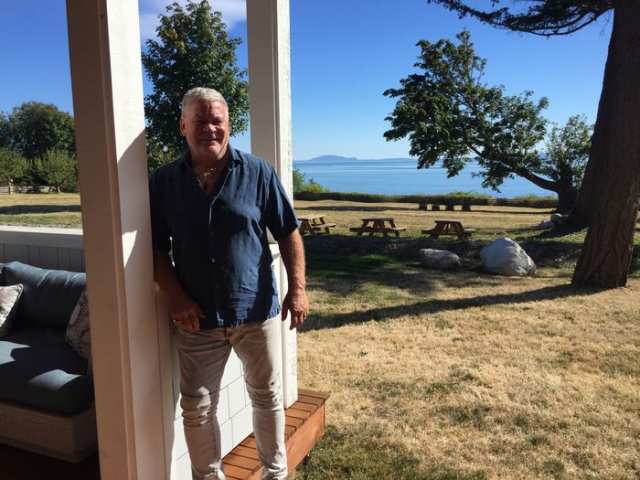 More recently, as the value of the Canadian dollar dictates, they’ve also come to collect online purchases from shipping and receiving outlets, some so close to the border that individuals can walk across to get their parcels.

Today, a new wave of foreigners is hitting the scenic shores of Point Roberts, south of Tsawwassen — Chinese investors, buying up a marina, golf course and waterfront property for housing developments.

Businessman Wayne Knowles, a Canadian-U. S. citizen who’s lived in Point Roberts for 25 years and has a finger in all the big projects, believes Chinese buyers could be the economic saviour for the 13-square-kilometre peninsula.

“I believe so, thank goodness,” he said. “Their money is coming into Point Roberts, which we desperately need.

We’ve seen a whole bunch of activity. Point Roberts will be much different five years from now.

They (Chinese) are looking for good opportunities and Point Roberts has just been sitting here,” Knowles said. “It’s been a diamond in the rough forever. People are finally coming down here and seeing how beautiful it is.

Others are taking a more cautious approach.

Point Roberts has always had economic ups and downs, but little ultimately changes.

Realtor Paul Rusk, another dual citizen, said that when he started in the industry 26 years ago he sold lots for $20,000 apiece and that’s still the case. It can take two years to buy or sell a property, simply because prices fluctuate little and no one has a sense of urgency.

“Waterfront or view properties have gone up a little,” said Rusk. “But I tell my clients it’s a lifestyle purchase not a financial purchase.”

His clients are not Chinese investors interested in money-making ventures, but those making recreational or lifestyle choices. He laughs at suggestions that people on witness-protection programs are relocated to Point Roberts. “This is the last place. There’s no jobs, and you know everybody who’s here.”

Some of the more high-profile residents of Point Roberts in recent years have included ex-Canucks coach John Tortorella and actor Katee Sackhoff, who rented a home during filming of the TV series Battlestar Galactica in Vancouver.

As in any community, the interests of business do not necessarily match those of ordinary residents.

Mark Robbins, president of the Point Roberts Taxpayers Association, notes that about 1,300 permanent residents enjoy the peace and tranquillity of the point and can be wary of change.

“A lot of people are intuitively uneasy with change,” he said. “You cross that border and it’s a giant relief, especially at night time — a dark rural community, no sidewalks, no street lights. That’s what a lot of people like.”

But they also recognize the need for more services in the community, where residents are often forced to drive to Tsawwassen to eat out. And few people would complain if development spurred an increase in property values, which have stagnated compared with the soaring values in recent years in Metro Vancouver. Robbins hasn’t heard locals express any negative sentiments toward the Chinese investors, who are spotty visitors to the community.

As Knowles tells it, the new wave of investment started five years ago when a Chinese lawyer friend of his in Vancouver put him in touch with Beijing businessman Gao Zhu, who went on to acquire 51 per cent of Seabright Farm, a relatively pricey strata project being developed by Knowles and another business partner, Anders Kruus of Seattle.

Seabright consists of 62 building lots on 25 hectares on a bluff with ocean views, swimming pool and fresh vegetables for your dinner.

Knowles said that Zhu is a friend of Beijing billionaire Chen Yihong, chair of China Dongxiang, a sportswear company boasting the popular Kappa-brand products in China and Japan.

Yihong visited Zhu and “fell in love with Point Roberts” and the two teamed up in May 2015 to buy Point Roberts Marina for $27 million, with Yihong owning a 90-per-cent share, Knowles said.

The marina’s old docks are being upgraded and the number of slips reduced to 600 from 900 to accommodate larger pleasure craft. Long-term plans call for housing, a spa, clubhouse, restaurant/nightclub, swimming pool and tennis courts, said Knowles, who is also vice-president of development for the marina.

Yihong has also purchased two houses and a 2.5-hectare piece of high-bluff waterfront property on Marine Drive worth a total of US$4.6 million, Knowles said. 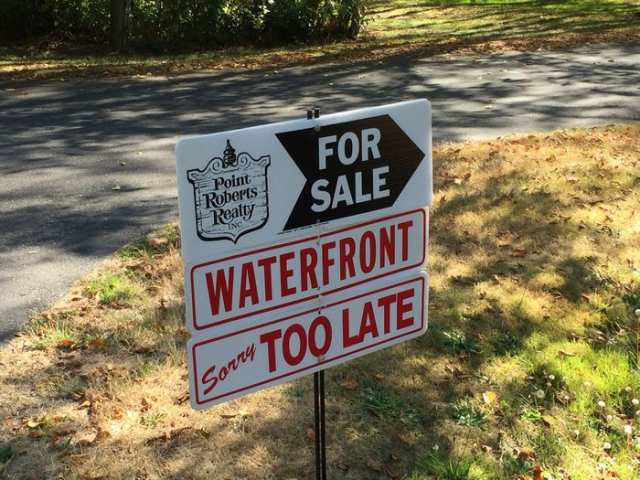 A Chinese billionaire has purchased two houses and a 2.5-hectare piece of high-bluff waterfront property on Marine Drive worth a total of US$4.6 million.

His purchases may have stirred interest in Point Roberts among other Chinese. “He’s very ambitious … and very well known,” Knowles said. “Once he purchased here, others found out about it. ‘If he’s investing, it must be a good deal.’”

In July this year, Coco Luo, a Canadian permanent resident living in Richmond for the last three years, but originally from Hunan Province, bought the 18-hole Point Roberts Golf and Country Club for US$4.5 million with two partners, all of them real-estate developers from China.

Luo is managing partner, an avid golfer with a 12-handicap, and owns two golf courses in China. 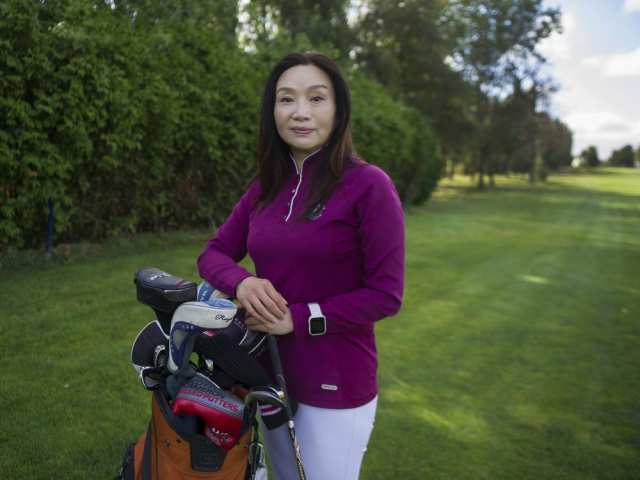 In an interview with the help of an interpreter, she said work is underway to bring the golf course up to snuff, with a projected reopening date no later than spring 2018 as Bald Eagle Golf Club at Point Roberts.

There are also plans to develop a clubhouse and 60 homes around the golf course, with land clearing beginning this month.

Luo said Yihong is a friend and that investments by him and other Chinese people in Point Roberts “more or less” proved a factor in her decision to buy the golf course.

She was also impressed by the fact the soils under the course allow for golfing over winter when other courses are sopping wet, and the site’s close location to Vancouver and Richmond, with its high proportion of Chinese immigrants and potential golf clientele.

“It’s not just a commercial project, to just sell all the lots and get the money,” she said, emphasizing the investment coincides with her passion for the sport.

Knowles added that another Chinese-owned company, 1350 Lundrigan LLC, with Richmond investors, in October 2016 paid US$3 million for 10 hectares of waterfront bluff property across from the golf course on Marine Drive in hopes of developing 19 estate lots. Knowles is a consultant on that development.

It’s also worth noting that Kiniski’s Reef Tavern, the last bar standing on the point, is for sale for US$1.6 million. The owner, Nick Kiniski, is son of the late wrestling champion Gene Kiniski, who described himself as “Canada’s greatest athlete,” despite living in Blaine, Wash. “If I had big bucks … I’d redo it all and put a nice condo on top and keep the bar open and live here, but that’s not in the cards for me,” Kiniski told Postmedia News.

And nearby at an old cannery site on Marine Drive, the faded yellow paint on a prominent wood-frame waterfront building may finally get some sprucing up.

The 17,000-square-foot facility, built in the late 1990s, is proposed for expansion to 37,000 square feet as part of the $15-million development of the 30-room Blackfish Resort — offering much-needed accommodation on the peninsula, complete with a spa and restaurant dining, styled after Tofino’s Wickaninnish Inn.

The dream of Steve O’Neill, a carpenter, is not new. In 2009, the Bellingham Herald trumpeted O’Neill’s plan to create Blackfish Resort. He said at the time he hoped to start construction in 2010 and have the resort open by spring 2012.

What’s taken so long? “I ran out of money,” concedes O’Neill, who holds a contract to develop the property and is in talks with investors. “I’ve put more than $1 million into the project. My whole life savings have gone into this.” He hopes to have the necessary building permits secured soon and a sod turning perhaps by year end. “It’s taken a long time, but it certainly is moving forward.”

Whether all these good intentions change the face of Point Roberts forever or are simply more bumps on a sleepy country road remains to be seen.

Dean Jones, owner and CEO of Realogics Sotheby’s International Realty in Seattle, said he is not surprised Point Roberts is starting to catch the attention of Chinese investors. Jones said that over the past several years Chinese investors have become dominant buyers in Seattle’s real estate market and driven price increases, in an echo of the Chinese-investor boom that he said has occurred for the past 20 years in Metro Vancouver.

He said that increasingly in Seattle and “tertiary” markets across Washington state, institutional and individual Chinese investors are seeking out residential, commercial, and “lifestyle” property assets such as golf courses, vineyards and vacation property.

The trend is partly driven by large investors who realize tourism and immigration from China is on the rise in Washington. Some of these Chinese investors are seeking large assets such as marinas and hotels in immigration-investment programs, he said. Also, as prices skyrocket in major urban centres favoured by international investors in B.C. and Washington, investors are turning their attention to undiscovered markets, according to Jones.

“Point Roberts is a unique little slice of real estate, because it is America, but it’s accessible through B.C.,” Jones said. “It doesn’t surprise me that someone wants the Vancouver lifestyle at a fraction of the price.”

But do a few big investments from China predict a Point Roberts boom?

Jones said believes that the volume of real estate investment from China is so large that buyers are recognizing they can follow fellow Chinese investors into newer pockets of interest and “create self-fulfilling prophecies of rising markets.”

“Once these relatively obscure markets are on the map, it becomes like a self-priming pump,” Jones said.

Rusk, the local realtor, is accepting of the status quo, which includes running through the woods or cycling the back routes with a good chance of not seeing another human being.

with file from Sam Cooper